﻿ Aikido Meikakukai - ... the webpage of the hungarian club.

Nobuo Maekawa Sensei was born in Hyogo, Japan in 1948. He started learning Aikido in 1963 when he was a high school student and founded an Aikido club there. In 1967, he entered Tottori University. During his school days, he founded an Aikido club at the university and was visiting Okinawa to learn Okinawan Karate. During that period he also began to learn one of the old style Aiki-jiu-jitsus called Ootsuki-ryu Aiki-jiu-jitsu.
After graduation, besides continuing his Aikido training, he was learning Daito-ryu Aiki-jiu-jitsu in Tokyo from 1980 until 1998. During this period he also taught Aikido to the students of Tottori University from 1980 until 1997.

He also thaught Aikido to the students of Ryukyu university from the year of 1988.
In the year of 2000, he founded the martial art society called Meikaku-kai and kept on teaching Aikido and Aiki-jiu-jitsu as a Grand Master in Tokyo and Okinawa.
In 2002, his own dojyo (gym) was built in Kyoto, which gives place for the regular Meikakukai trainings and has many members from the society nowadays.

Maekawa sensei is a Shihan of the Aikikai organization and also reached high rank in the traditional aiki-jiujitsu.

So far he visited our country six times:

– in 2009 two seminars were organized in Budapest

– in 2011 a weekend seminar was held in Budapest

there were opportunities to experience Maekawa sensei’s techniques for the interested ones.

In 2014 Maekawa Sensei was elected as the Chairman of the Kyoto Aikikai Federation. Congratulations Sensei! 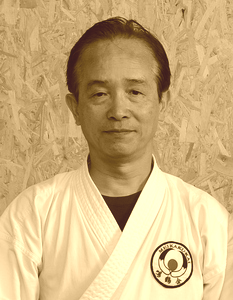